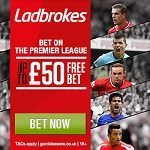 David Moyes chances of landing the vacant Aston Villa managers role appear to be on the rise, with his odds tumbling in recent days.

The Scot was once deemed a 9/1 but a spate of bets forced the Ladbrokes trading floor to shave that price to 6/1 before sustained interest saw the odd shorten further still to 4/1.

Moyes has added fire to the flames by suggesting he is ready to get back into management and sees the Villa Park role as an exciting opportunity.

Moyes is looking to rebuild his reputation after a poor showing at Old Trafford and in Spain and has moved ahead of a host of rivals in the race for the Villa job.

A Ladbrokes spokesperson said: “Aston Villa must get their next appointment right, and David Moyes is no stranger to working wonders under pressure.”

Villa are already consigned to relegation to the Championship but the club can attempt to claw back some credibility when hosting Southampton at Villa Park this weekend.

All Odds and Markets are correct as of the date of publishing.

Get your free bet at Ladbrokes! Read about our Ladbrokes promo code here!